The most beautiful walk of the Veneto Region 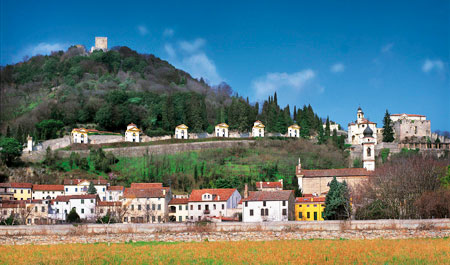 The splendid path that winds on the slopes of the Rocca hill and was defined by the poet Gian Antonio Cibotto “the most beautiful walk in  Veneto” is characterized by a succession of extraordinary places, in which the very essence of the historical events of the city is kept.

The tour starts from Piazza Mazzini, a square closed on its western side by a long section of the medieval walls built by the da Carrara family and includes the 13th century Torre Civica (Town Clock Tower). Facing it is  Via del Santuario  a beatiful hilly street unfolds following the slopes of the Colle della Rocca (Citadel Hill). On the left is the Chiesa di San Paolo (St. Paul’s Church) now seat of the Town Museum. In its crypt is a 13th century fresco showing St. Francis of Assisi, the oldest depiction of this saint in the Veneto region.

On the right is the former Monte di Pietà mansion, a building dating from the 15th century with a graceful 17th century loggetta characterized by Doric columns. It hosts the Tourist Information Centre.

Following Via del Santuario you reach the Castello (Castle), a fortress dating from the late Middle Ages re-built by Ezzelino III da Romano in the 13th century and enlarged by the da Carrara family in the 14th century. It was transformed into a private mansion by the Marcello Venetian noble family and took on its current appearance at the end of the 1400s. In 1942, it was made a museum by Count Vittorio Cini who added a rich collection of arms, furniture and furnishings. In the 16th century library that looks out onto Via del Santurario is hosted  the Antiquarium Longobardo  where important archeological finds from the Lombard necropolis discovered on the Citadel Hill are displayed. Continuing the ascent is the Villa Nani-Mocenigo, a splendid late- Renaissance building with an imposing stairway in perspective. Allegorical statues of dwarves embellish the outer wall, a clear allusion to the noble family that commissioned its construction. Facing the villa on the other side of the street there are the old stables.

Just beyond them  is  Pieve di Santa Giustina (also known as the “old cathedral”) with its late-Romanesque architecture and gothic decorative elements. It was consecrated in 1256 and houses a number of important works of art, including the Madonna dell’umiltà (Our Lady of Humility) and a 15th-century polyptych of Venetian school. Among the illustrious canons of the church there was also the great Italian poet, Petrarch.

Pass through the Porta dei Leoni (Lions’ Gateway) to reach the Rotonda (panoramic terrace) from which you can enjoy a beautiful view on the surrouning plain. The Porta Romana (Roman or Holy Door), erected in 1651, marks the entry to the sanctified area of the Santuario Giubilare delle Sette Chiese (Sanctuary of the Seven Churches), designed by Vincenzo Scamozzi for the Duodos, a Venetian noble family who were ambassadors for the Serenissima Republic to the Holy See.  A 1605 papal bull of Paul V grants the Sanctuary the same indulgences given to the faithful during pilgrimages to the seven major basilicas in Rome. Monselice is the only example of this particular form of Roman devotion. On the entrance gate, the so called Holy Gate, the inscription “Romanis Basilicis pares” remarks the connection with the Roman Basilicas. The chapels house 17th century altar-pieces by Palma the Younger.

At the top of the route is the elegant  Villa Duodo. To the right is the oldest structure dating from the early 1600s, designed by Vincenzo Scamozzi, while the front wing with its bas relief was added by Andrea Tirali in 1740. To the left is the spectacular Exedra dedicated to St. Francis Xavier, the Spanish Jesuit missionary who stayed in Monselice in 1537 on the eve of departure on his long trip to the Far East.

On the right next to the villa is the oratory of Saint George, decorated by frescoes of Tommaso Sandrini and adorned with a remarkable altar-piece with inlaid marble and semi-precious stones from the Corberelli workshop. The transfer of Christain martyrs from the catacombs in Rome  in 1651 enhanced the holiness of the oratory. Among the holy corpses there is St. Valentine, who is celebrated on 14 February with the popular ceremony of the blessed “golden key”which is  given to children to protect them from epilepsy. On the left of the exedra a stairway and path lead to the top of the hill (150 m) dominated by the imposing Mastio Federiciano, known as the “Tower”, an imposing stronghhold ordered by Emperor Frederick II of Swabia who, on his visit to Monselice in 1239, declared Monselice  “special imperial chamber”.